Say Puente Genil, that is to say Holy Week or Mananta, constituting one of the most important and unique manifestations of popular religiosity in Andalusia. La Mananta acquires a unique seal in Puente Genil and its origin dates from around 1664. 23 brotherhoods process from Passion Saturday to Easter Sunday, accompanied by those of biblical figures characters from the Old and New Testaments and symbols of Christian theology.

The great moment of La Mananta takes place on Good Friday at dawn, with the interpretation of the Diana in honor of Nuestro Padre Jesús Nazareno. The prelude to Holy Week is its long-awaited Lent, with the Roman Saturdays, a unique event that happens every Saturday in Lent and on Palm Sunday with the “ascent to Jesus.”

Pontana Holy Week has its roots in the origin of the town itself. The town, under the supervision of the Marquis of Priego, is experiencing an incipient religious boom that translates into the appearence of brotherhoods that process during the Easter Triduum and that, from 1664, are accompanied by biblical figures who theatrically arrange the different passages and Christian dogmas. A walking catechesis of such a popular character that in many moments it wanted to be dismantled by the most purists, but which, fortunately, has reached our days with little variation, the Mananta being lived today with the same intensity of other times.

Although this unique celebration takes its first steps days before Palm Sunday, it is precisely on this day that the swing of public and private services begins with the procession of the Entry into Jerusalem, where many children participate, and the last climb from the Romans to Calvary, where they sing the Miserere and the Stabat Mater. On Monday, Tuesday and Wednesday the processions of the Sagrada Cena, Santa Cruz, the Afligidos, the Calvario, the Virgen del Consuelo, the Lavatorio, the Señor del Huerto, the Humilde y the Amargura, images carried by both bastoneros and by costaleros, men and women. But it is with the Easter Triduum where the main nucleus of the celebration is found. Thus, on Thursday the procession that starts from the hermitage of Veracruz, accompanied by a large group of biblical figures, stumbles upon the Roman Empire in Ancha Street. In the first of the meetings that mark the Week, they sing their praises to the headlines.

At half past six on Friday, the Romans set out in search of the Terrible, to whom they played the Diana. During his escort, the figures appear who perform different curtsies and the sentence is read to the defendant. In the afternoon, the world succumbs to darkness as represented in the procession that starts from the Dulce Nombre. In its evolution, San Juan dances to the sound of the Tripili and the Picoruchos burst in with their out-of-temper drums accompanying the Demon and Death. Christ has died and this is solemnly witnessed by the procession on Saturday.

But Puente Genil also celebrates life and, with the dawn of Sunday, the rockets begin to thunder that give way to the Resucitado accompanied by all the participants in the processions of previous days.

Every week of Lent, the escuadras parade to the sound of the Roman Empire before Jesús Nazareno, the Terrible, in an act called “Roman Saturdays”. At the end, the brothers dine in their cuarteles and one rips off the old Cuaresmera leg. This figure is a liturgical calendar in the shape of an old woman in mourning that carries Lenten products -berza, cod- and that, under her skirt, hides seven legs corresponding to each Saturday of this liturgical period and Palm Sunday.

The enlightened bishops tried to “normalize” the Mananta by forbidding the biblical figures and their rites. But thanks to the efforts of Concepción Cosano Pino before the prelate, widow of the town’s mayorazgo and brother of the Nazareno, these demonstrations could be maintained as elements of popular religiosity.

They parade within the processional processions as theological elements, distinguishing between those of the Old and New Testaments and the symbols of religion. The brothers of the Biblical corporations draw annually who is dressed with the face, the wig and the clothing, and who bears the martyrdom of the represented. Throughout the parade, these images wander in the same position in order to clearly show the iconography of the represented.

Similarly, the Romans are understood as part of this allegorical ensemble, but their role is less rigid. They parade from Thursday to Easter Sunday in squads of different colors, and they wear gold helmets and white or black plumes. His costume is made up of a satin or velvet bodice, a casket or skirt with fringes, white stockings, silk boots and a cape, more or less decorated according to rank. In one hand, they carry a sword or halberd and, in the other, the shield or rodela. Some carry banners and flags, others musical instruments. The higher the grade within the century, the costume is embroidered in precious material with the utmost profusion.

Due to its particularity, the group of Death, the Demon and the Picoruchos -nazarenes who procession smoking cigars and playing harsh drums- stands out, signifying the triumph of darkness.

At half past six in the morning on Good Friday, Jesús Nazareno’s muñidor walks through the streets of Puente Genil to the headquarters of the Roman Empire. At dawn, the Roman soldiers march in search of the Terrible, who appears through the door of his hermitage before the images of the Cristo de la Misericordia next to the Virgen del Mayor Dolor, San Juan and the Magdalena, the passage of the Virgen de la Cruz y San Juan, and finally, that of the Virgen de los Dolores. A deep silence runs through the esplanade of Calvary until the notes of the Diana sound.

Shortly after, the figures meet the procession to make several bows and, next to the bridge, a representative of Pilatos reads the sentence of death of the prisoner, the Sermon del Paso.

It belongs to the group of tonás, with a descending scale and a rigid scheme. Its melodic line is flat, almost in dialogue, and it is sung aloud as a prayer. There are also pontan choral songs, the lark and the batido, which can be heard during Lent and Holy Week. 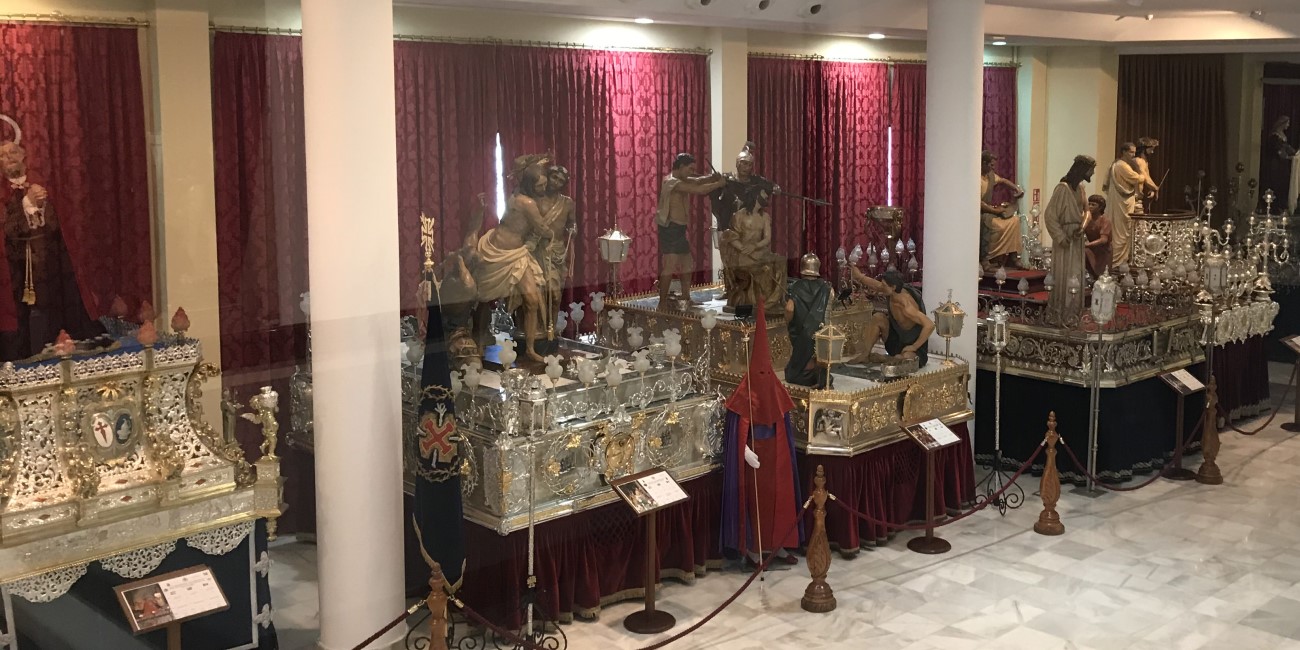