The town of Lucena is located in the south of the province of Córdoba in the centre of Andalusia. It currently has a population of around 42,500 distributed over an area of 350 km². Furniture making and industrial refrigeration are the town’s main economy.

It is a town where tradition, roots and cultural identity are considered its most important resource. Known as the Pearl of the Sepharad, during the medieval era, Lucena became a prosperous enclave with a rich legacy bequeathed by the three cultures that left their mark on its monumental heritage with extraordinarily beautiful Baroque palaces, chapels and churches.

Lucena is also renowned for its artisans with family traditions of creating art by hand stretching back generations. Since Roman times, Lucena’s potteries, where unique pieces are created, have enjoyed prestige, in the same way as its precious silver and bronze workshops, with the “Velón de Lucena” being the most traditional piece and the town’s symbol.

Lucena’s devotion is expressed through its various ancient traditions, such as locals’ devotion to the Virgin Mary of Araceli. The town’s main festivities culminate during the first Sunday in May with the Araceli celebrations, which were granted National Tourist Interest status and Holy Week, which was officially recognised as an Andalusian tourist attraction and is unique given the way the floats are paraded through the streets, known locally as “Santería”.

With Jewish, Muslim and Christian legacies, Lucena is different from many other historic towns in Andalusia.

From its Sephardic past, Lucena preserves the largest excavated Jewish necropolis on the Iberian peninsula and the first Jewish cemetery accessible to people with reduced mobility in Spain. The Castillo del Moral castle, where the last king of Granada was held prisoner, stands proud in the town centre.

The finest example of Cordoban Baroque can be found in the imposing San Mateo sacrarium, housed in the church of the same name, which also has a magnificent altarpiece.

San Pedro Mártir church is also noteworthy, which is part of a monumental complex together with the Nuestro Padre Jesús Nazareno chapel. Close to the church stands the House of the Mora family, a former Dominican convent, renovated to host permanent exhibitions “Our School” and “Artesanía Velonera”, which explains the art of candle lamp stand making, as well as other industries that are centred around metalwork and crafting ornate religious pieces.

One of the town’s most unique events is Holy Week, renowned for its distinctive style, which mixes art, aesthetics and tradition. The town is best known for La Santería, the unique way the floats, locally called tronos, or thrones, are carried through the streets, not to mention the wonderful sculptures that sit atop them. The men who carry the floats are called santeros and follow strict rules of respect and solemnity. They stand on the outside of the float and take the weight of a beam on their shoulders. They wear tunics and hoods, but their faces are uncovered.

Other important aspects are the torralbo, which announces the arrival of some of the processions with an untuneful fanfare, and the solemn beating of the drum, which is essential to helping the santeros keep their marching rhythm.

For locals, Holy Week is a feeling that is fervently passed down from one generation to the next. There are currently 17 brotherhoods, some of which are more than four centuries old. 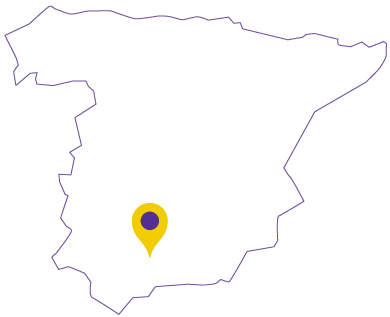