Priego de Córdoba is located –as it name indicates– in the province of Córdoba and currently has a population of 23,000 in an area of 80 km². Nestled within the Sierras Subbéticas natural park, the town preserves the very essence of Andalusia.

Priego de Córdoba is located at the foot of a natural vantage point, where a fertile plain is surrounded by a ring of elevated land. These geographical factors made for early human occupation, which evolved over several centuries of its history.

King Ferdinand III seized the town from the Moors in 1225, only for it to fall back into Almoravid hands.

At the turn of the sixteenth century, with the stability that set in once the conflicts with the Moors were resolved, the town experienced an economic upsurge, mainly due to the growing textile industry. It was thanks to this wealth that the town was able to introduce Baroque architecture to its streets, which today represents one of its main artistic legacies.

The Mannerist-style Carnicerías Reales building, originally the slaughterhouse and meat market, is also worth visiting. However, the town’s most symbolic monument is the Fuente del Rey-Fuente de la Salud fountain, which combines water and mythology.

In addition to its wonderful monumental heritage, Priego de Córdoba is renowned for its surrounding countryside and the Sierras Subbéticas natural park.

Priego de Córdoba has some of the most outstanding Holy Week traditions in the area. The entire town demonstrates its fervour and emotion by taking to the streets to accompany the wonderful processions presided by extraordinary sculptures. The solemnity of the different brotherhoods, which begin on Palm Sunday, contrasts sharply with the popular participation in the ritual of Good Friday, when a great number of people yearn to be placed next to the steps to climb to the mount of Calvary where the Jesus the Nazarene will bless thousands of ‘hornazos’ shown by his devotees with his hand raised.

Another of the most relevant moments is the Arrest during Holy Wednesday, a representation of sacred theater that stages the Last Supper of Jesus, the Prayer in the Garden and the Arrest. Following a script from the 18th century, the biblical figures of Jesus, Judas, the twelve apostles, executioners and Jews, interpret it accompanied by chapel music from the same period. 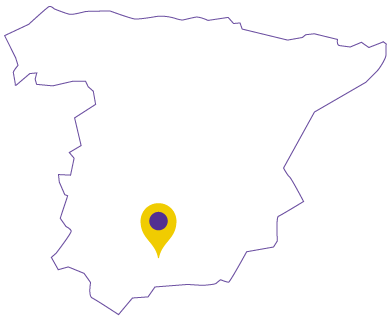