Baena is a city in the province of Córdoba, an autonomous community of Andalucía, with about 20,000 citizens and 363.3 km2 of surface.

The name of Baena comes from the Arabic Bayyana, which, in turn, is the transcription of the name of one of the many roman villas that would survive until the visigoth period and that in the 8th century the Arab-Berber invaders chose as a place of settlement, fortifying it.

At the fall of the Caliphate it was brutally sacked by the Berbers fleeing to the South, interrupting its growing prosperity. By pact the muslims handed it over to Fernando III in 1241.

The border situation caused multiple conflicts. Thus, in the year 1300, Muhammad II besieged the town and won half of it; The resistance of the Christians prevented their conquest and the muslims were expelled. This situation was repeated in the year 1330, reigning the same andalusian king, without being able to take the town.

The old city, the Almedina, in the upper part of the town, a neighborhood where its most representative monuments are located, the churches of Santa María La Mayor and Madre de Dios attached to its cloistered convent, the fortress castle, in addition of the different access doors to the walled enclosure. In Plaza de la Constitución is the Casa del Monte and a few meters down Santo Domingo de Henares street we find the Municipal Historical and Archaeological Museum, among its collections are exposed the pieces of the archaeological excavations of the already called Pompeya Cordobesa, the Torreparedones Archaeological Park.

Forming an urban set of winding and narrow streets, adorned with traditional and stately houses, Baena affirms itself as a historic city of Andalucía. In addition, it also stands out for its natural landscape, a unique landscape of olive trees, which generates one of the highest quality Extra Virgin Olive oils, possessing the oldest Denomination of Origin of this sector in Spain. You can visit the Olive and Oil Museum where you will find all the curiosities about the cultivation of this generous tree.

Holy Week in Baena has been declared of National Tourist Interest thanks to the peculiar figure of the Jew, of whom his clothing, which consists of an embroidered red jacket, black pants, a handkerchief tied around his neck and a metal helmet on his head draws special attention. with impressive chisel carvings on which a colorful feather duster shines. From the back of the helmet hang horsehair, white or black, which gives rise to the distinction of this peculiar character in Jewish Coliblanco or Colinegro, also carrying a “chillones” drum, whose touch is protected and declared as Intangible Heritage of the Humanity by UNESCO. 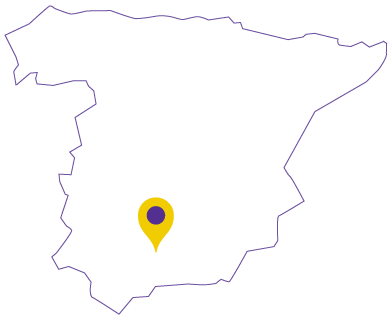