Écija is a town in the province of Seville and autonomous community of Andalusia. It has a population of around 40,000 and an area of 976 km². Écija is known as the “town of towers and sunlight” and is considered one of Andalusia’s most important artistic centres, amazing visitors with its exceptional cultural heritage.

It is believed that Écija was founded in around the eighth century BC with the so-called Tartessian civilisation, but it was under Roman rule that it grew in importance. In the year 14 BC, the Romans founded the ‘Augusta Firma Astigi Colony’, which would convert it into a large town with paved streets and a bridge over which the Vía Agusta crossed the river Genil.

Following the fall of the Roman Empire, the town continued being an important cultural and religious centre during the Visigoth and Islamic occupations and was renowned for its fertile lands, mainly used for cotton production.

In 1240, Ferdinand III conquered the town and distributed the land among Castilian colonists, who were members of nobility, the clergy and military orders. Throughout the eighteenth century, Écija experienced a period of splendour with the construction of civil edifices and churches. Its historic centre is one of the best legacies of Baroque art in Andalusia.

There are many reasons to visit Écija. The town is home to many palaces, such as Peñaflor Palace, boasting an impressive façade decorated with fresco paintings; Benamejí Palace, site of the town’s history museum, Valdehermoso Palace with a 16th-century plateresque portal, Santaella Palace and the Palma Historic House Museum.

Its religious architecture is also exemplary, especially fifteenth-century Gothic-Mudejar Santiago church and Santa Cruz church. Another important place of worship is La Concepción church. Other religious monuments worth visiting are Santa María church, erected during the transition between Baroque and Neo-classical styles and home to an important archaeological collection, the Discalced Carmelites church, an Andalusian Baroque treasure, and San Juan church, whose majestic Baroque tower is one of the most emblematic in the town.

Holy Week is undoubtedly the most important moment on Écija’s calendar. Every year, locals and visitors from afar fill the town’s streets and squares to fervently watch the brotherhoods parade their religious sculptures, some of which are hundreds of years old. 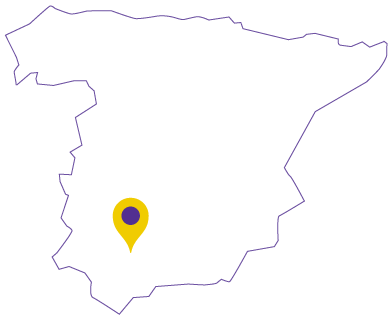